Learning proper trapshooting fundamentals is critical to a shooter’s success. Being part of the association is a great way to improve your shooting skills and create the sort of memories that will last a lifetime.
LEARN MORE 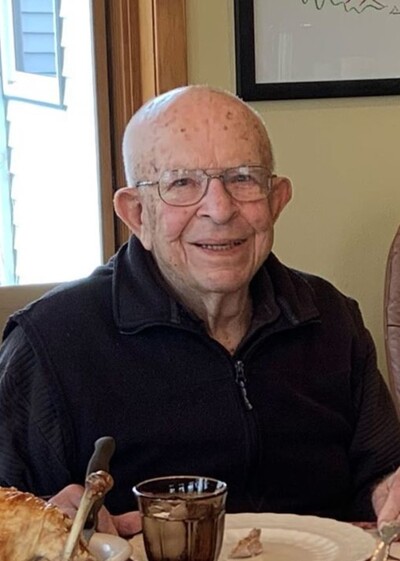 Harold Cyr 92 of Oklee, MN, passed away peacefully on Sunday, September 12, 2021, at his residence with his loving family by his side.

Harold Anthony Cyr was born on April 13, 1929 in Crookston, the son of Frank and Leontine (Beaudin) Cyr. He attended school in Oklee, graduating in 1949. He was drafted into the US Army in February of 1951 and received an honorable discharge in December of 1952. He spent a large portion of his time in the Army as a cook at Elmendorf Air Force base in Anchorage, Alaska. Other than his time in the service, he was lifelong resident of Oklee.

On August 4, 1953 he married Shirley Ann Turgeon at St. Francis Xavier Catholic Church and they celebrated 68 years of marriage this past year.

Other than his family, Harold’s greatest passion was hunting. He hunted deer, loved to chase fox and coyotes, but his real love was to hunt waterfowl. When they were still in the store, most of October and November, Shirley would open so he could pursue his passion. Any time that he could have a shotgun in his hands, it was a good day. He also loved to shoot trap and competed in ATA trapshoots when he was able. He was always proud of breaking 199 out of 200 at the North Dakota State Shoot in Grand Forks. He also participated and won events in league shooting in Thief River Falls and Red Lake Falls.

NEW! – Blasts From The Past

MTA members and guests, here you will find photo’s, articles, programs and artifacts from day’s past in the Trapshooting World. There will be no rhyme or rythem so check back often for new/old items. Enjoy!

Go to the Blasts From The Past page

The 2022 Harlan Campbell Shooting Clinic will be Friday and Saturday, July 1-2, 2022 at the Owatonna Gun Club. The cost is $395.00 for the 2-day clinic. Reservations are required. Shooters interested in taking the clinic can contact:

The Minnesota State Teams is the in state equivalent to the ATA All American Teams. The MN State Teams are comprised of the Top Shooters in their respective categories and in most cases it is your overall average of Singles, Handicap and Doubles. 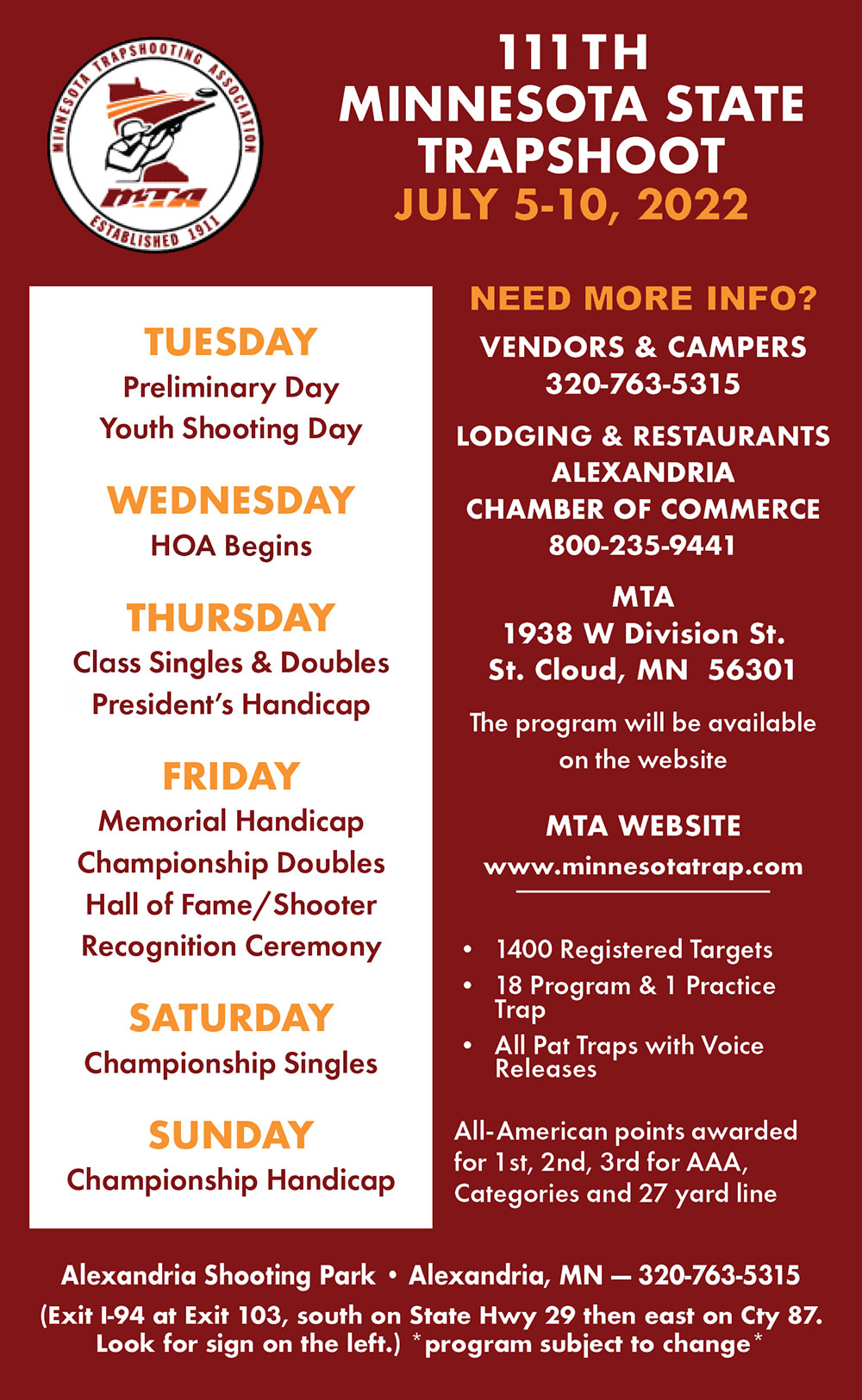 Association Area Clubs
Finding a local club in your area is paramount in helping you learn and grow in the sport of trapshooting. Here is a list of the various clubs in the Minnesota Trapshooting Association.  FIND A LOCAL CLUB.  Download our FREE MTA Wallet Card.
Club & Special Events
We have a calendar for the various club events that are scheduled throughout the state.  The calendar should provide you with the event details, location, fees, registration, and fees as they are available. SEE CLUB CALENDAR
2022 State Shoot Information
We are ready to get the season started.  We will post event results and much more as the season progresses.  For camping and vendor information contact Cindy Townsend @ 320-763-5315 or cjt08@ymail.com.  So check back and check back often!
2021 RESULTS
Download 2022 State Shoot Program
2022 Hall Of Fame Inductees

This year’s inductee’s are very deserving for their many years of service and dedication to the MTA Association. Be sure to reach out and congratulate our newest member’s of the MTA Hall of Fame!

Winners of the Youth Raffle
• Blazer F3 Shotgun – Duane Bohn
• CZ Shotgun – Al Pickett
• ATA Life Membership – David Smith, Chicago City. David will be donating the ATA Life Membership back to be auctioned at the 2022 Live Auction . Thanks David.
Congratulations to the winners and thanks to everyone who bought tickets.
MTA Hot Shots
See some of our association’s top shooters and their accomplishments on this page. Many of them you may already know. Isn’t it time to add your name to the list!  MORE INFORMATION
MTA Newsletter Signup
Please provide us with your name and email address so we can update you with news, events, resources, association updates and more. We will never sell or share your information, EVER!

Grand American Hot Shots
The Grand American World Trapshooting Championships, annually held in Sparta, IL at the World Shooting & Recreational Complex, is the largest shooting event of its kind.
Shooting Event Promotion
Is your Club organizing, planning, or has a scheduled MTA event soon? We want to help you promote it!  DOWNLOAD THE EVENT FORM and we will add it to our Events page.
Pre-Squad Shoot Events
Pre-squad events will open for the MN State Shoot May 1st at 8AM.
REGISTER HERE!
Just A Few Of Our

Do you have a special team member or even a team in your area you would like to feature?
Send a great photo and a story and, who knows, it just might appear here! 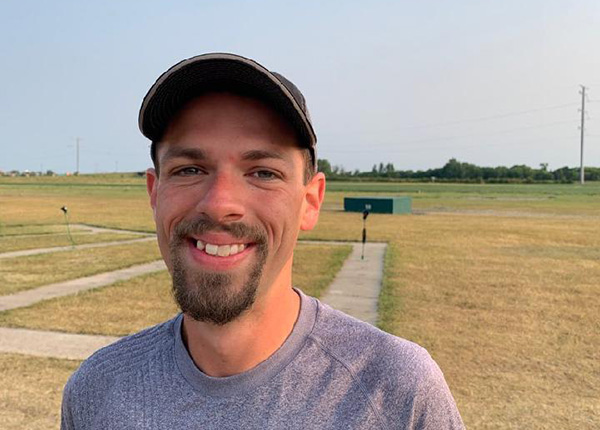 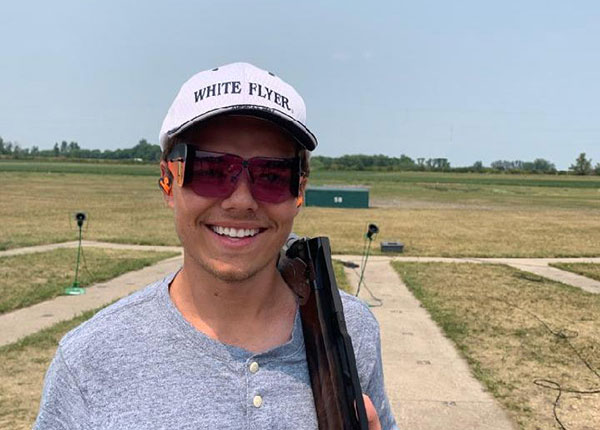 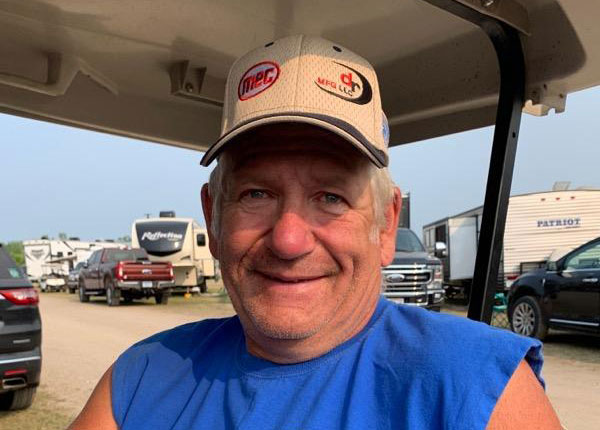 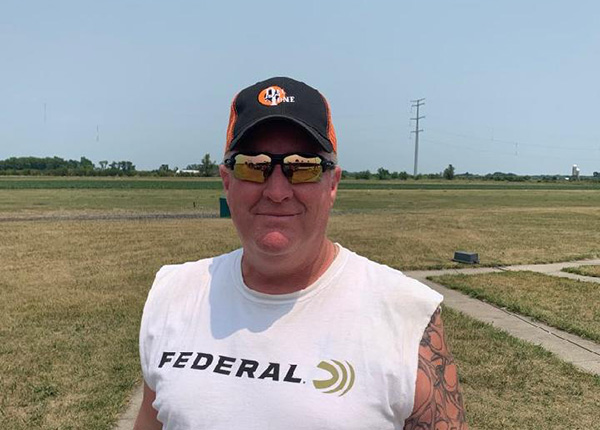 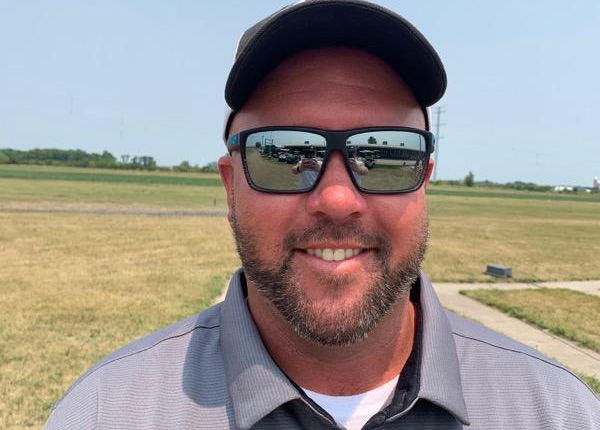