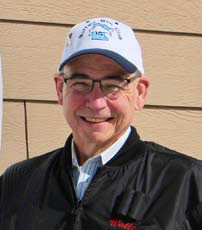 Family. For Wally Shelstad, creating a strong family bond has fueled his drive for excellence—at home, work, and at the Buffalo Gun Club— and is his secret to overwhelming success.

Wally’s dad, also Walter, lived for hunting and fishing, and included his son as soon as he was old enough to be safe. They were hunting buddies until Walter passed in 1979. It wasn’t until Wally’s wife, Sheri, joined a trap team at her work that Wally became intrigued with the sport. “I had only shot trap once, for a groom’s event. Sheri told me I should check it out.” Wally joined a league in 1976, then a couples’ league later that fall and was hooked. In 1977 he volunteered to be BGC’s Secretary and has served as BGC’s President ever since 1978.

Back then, shooting was more social than competition, with an old fish house serving as the first clubhouse, complete with a little counter, two refrigerators for beer and no rest room, “just some lilac bushes by the North Star gas station!”. With an influx of women shooting, improved facilities were needed and, though cash flow was tight. Wally managed to make ends meet and by 1983 had put up a true building, followed by an addition in 1991. Huge improvements occurred in 2006 when BGC received a MN DNR Shooting Grant—sidewalks were poured and all three trap fields were redone, and again in 2015 when an electrical fire leveled the building. “That fire unified the club,” exclaimed Shelstad. “It unified the members—everyone pulled together and we were back up and running in three days. It was unbelievable!”

Wally introduced ATA registered shooting in 1989 and realized shortly afterward that, if you put together a good program, people would come and support it. “Just like I did in business, I knew I had to develop my own client base with good marketing and incentives—entice people to come and not just expect it—and always let them know how much I appreciated their business.” One big ‘aha’ moment came after Wally thanked an older shooter for coming out. “That shooter came back five minutes later to tell me that I was the first person who ever thanked him for shooting at a gun club. It was a huge moment for me—customer service—you’ve only got one product at a gun club and that’s the target in the air.” The increase in youth shooting since 2001 has refueled his passion for shooting and managing the club. “The kids bring so much enthusiasm with them when they walk through the gun club door,” says Shelstad. “They just beam!”

While shooting competition used to be a focus, oral cancer in 2012 changed his perspective on the sport. Surgery and radiation on the right side of his face have resulted in loss of hearing, nerve damage and constant pain while shooting, but his new Pro Soft stock looks promising. “Before my cancer I would have called myself a shooter. Now I call myself a supporter, marketer—it’s fun to create something and see how it turns out. I hope to get more shooting in because of the Pro Soft and some decrease in my pain.”

Wally says being the first ATA Club of the Year (2007), ATA Volunteer of the Year (2009), being the 2009 Minnesota’s Doubles Champion with the lone 99×100 in the program and his 99.08 Singles average in 2004 are shooting highlights of his career. The biggest highlight of his life? The constant love and support of his wife Sheri in all his endeavors, and his entire family—Wally, Sheri, & son Kyle—shooting on the same line. “I’m healthy now and looking forward to sharing this sport I love with my grandchildren!” Congratulations, Wally, and thank you for treating all who cross Buffalo Gun Club’s threshold as family.