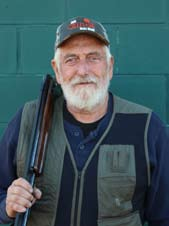 Tom’s first exposure to shooting was as a boy growing up on a farm near Villard, MN, shooting gophers and hunting with family and friends. In April 1972, Tom and Cindy were married and a month later he joined the Air Force. While stationed at Davis-Monthan AFB in Tucson from 1972 to 1976, he began trapshooting. “In our free time we would go out into the desert and throw clay targets by hand. We lived within two miles of the Tucson trap range, then located on the east side of town. We went there twice and observed the shooting from our vehicle, never getting out! It was after we moved home to Alexandria, MN, that Tom got involved with the trap range (then known as ‘Golden Eagle’), first as a shooter and then, over time, he became involved with the mechanics of the range. At the end of 2002, Tom became one of several investors in the ownership of Alexandria Shooting Park. In 2011, he became the General Manager of ASP. He began his working career as a mechanic at Newhouse Machinery in 1969, with a four-year leave in the US Air Force. In 1990, he became part of the ownership of Newhouse Machinery. In 2004, the company name changed to Alex Power Equipment, where he is an active owner in the business.”

Tom has always had an interest in training youth in the shooting sports, and he taught Firearm Safety as a training officer for 20 years. His passion for the sport of trapshooting is reflected in his work coaching youth and adults. Tom is always willing to assist shooters in any way he can. Many a time his work at the range has come to a halt to assist a shooter. He started coaching youth in 2005, with the summer Alexandria Area Youth Trap League, which he is still involved with to this day. In 2010, when the Minnesota High School Clay Target League Championship was moved to Alexandria, the Alexandria Area High School Trap Team was formed. The team started with six students and has had as many as 90 in one year. Tom began as head coach and still is to this day. He takes great pride in seeing young shooters excel in the sport.

As a shooter, he knows what he likes to have happen at shooting events, and he strives to make shooting events at Alexandria Shooting Park enjoyable for all who attend. Even when he travels to other clubs, and they have mechanical problems, he’s always ready to help.

One of Tom’s greatest accomplishments in trapshooting was winning the MTA Handicap Championship in 1984. His score was 99×100 and he won it outright. He almost left that day without collecting his trophy. Since Tom had only been shooting ATA competitively since 1980, he didn’t realize he could actually win that day. Over his years of shooting he has won many trophies— one of them being a Browning Citori won at Metro Gun Club in 1984, which he used until 2015. He has made the Minnesota State Team four times in his career. As of March 2017, his lifetime targets are: Singles – 83,250, Handicap – 90,300, Doubles – 59,200.

Over his years of shooting, Tom has gained many friends and memories to treasure and share. Tom also has taken great pride in seeing his daughters excel in the sport of trapshooting. His only regret is they did not start shooting sooner. They, too, have achieved great accomplishments in their shooting careers and credit their dad for his guidance and support. As a family they enjoy going to the Heartland Grand over the Labor Day weekend—their “wind-down” from the season. All five of them have brought trophies home from the Stockdale Gun Club. It was their son-in-law Luke, who beat them all by getting his picture on the cover of Trap and Field—an achievement they all take pride in and enjoy together.