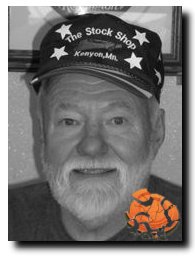 As part of the State-team trophy-winning Minnesota squad at the Grand in 1989, he took 3rd in AA (6th overall) in the Clay Target Championship, followed a year later with another 200.

1988 gave him the long-yardage trophy at the Wisconsin State Shoot. With all those years on the state team there have been countless lesser victories.

Tom has been a full time gunsmith since 1977. He first went “on the road” in 1989 and now spends nine months a year at shoots providing both long-term and “emergency” gun work to

shooters throughout the country. There are few long­time shooters in Minnesota who have not needed – and gotten – his help at a shoot to get them through an event or a weekend.

In the interview that led to this recommendation, as I pressed for more detail, he said “You know all I really remember and value from all those years is the good friends I’ve made along the way.”