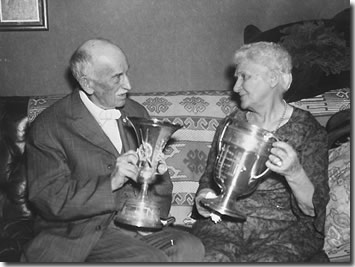 Sumner S. Johnston, aka S.S.Johnston, was known as the Father of Trapshooting in Minnesota in the late 1880’s. He was instrumental in organizing trapshooting events and managing gun clubs well into the 20th century. He competed against many of the top shooters in his day and was known from coast to coast as an outdoor sportsman. He was one of the originators of the Minnesota State Trapshooting Diamond Badge which was started in the year 1884 at the Minneapolis Gun Club, of which he was President at the time.

Sumner was a crack shot, both at clay targets and live pigeons, and defeated some of the greatest stars of that era. When it came to histories and records of live pigeon shoots and trapshooters of the past and present, Mr. Johnston knew them either personally or by reputation. Mr. Johnston had personally decorated the Diamond Badge winner for over 50 years at the annual State Shoot. The last winner he pinned the badge on was Forest Saunders in 1937. Sumner was also involved in organizing and developing the formal Constitution and By-Laws for the original Indian Tournaments and held the position of High Chief. Sumner died November 1, 1937 from injuries received when struck by a car while placing a red light to warn other drivers of a stranded vehicle.

Mrs. Sumner Johnston, Sophrona, was a great shooter in her day also. At the urging of her husband, Sophrona picked up a shotgun in about 1895 and began her remarkable career. Sophrona, known throughout the trapshooting community as Mrs. S.S.Johnston, eventually became one of the most famous lady live bird trapshooters in the world. She was quite proud of her record breaking 97 out of 100 at the traps. By 1900, she was featured with Annie Oakley in a story published in the New York Journal on the Grand American Shoot in Long Island. Sophrona and Annie were at many shoots, the only women competing. Her victory at a 1901 International Competition in Winnipeg, Canada, consisting of forty of the best trapshooters in North America, was perhaps her greatest accomplishment. Her perfect score in Winnipeg enabled her to capture the International Crown for both men and women. In the book, Trapshooting—The Patriotic Sport, Sophrona is mentioned as an enthusiastic lover of the sport and makes very creditable scores. Sophrona is also credited with winning 16 consecutive state championships in the Ladies Division. Sophrona died in 1942 at the age of 86.

Researched and written by Jim Walkowiak with Nancy Ferrell Geng