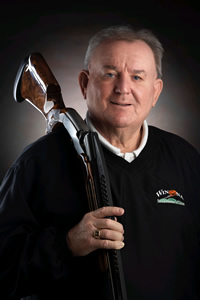 It is an absolute thrill and honor to be inducted into the Minnesota Trapshooting Hall of Fame. To think that this could happen to a farm boy from West Concord is amazing. You’ve probably never heard of my home town but I’m not the first inductee. Craig Hall was the first honoree in 1982, and to think I sat right behind him in high school study hall.

I grew up hunting pheasants and ducks. Back in the day, we even took our gun on the bus for hunter safety classes. Sometimes we drove to school with our gun in the pickup so we could go hunting after school. Good luck trying that today.

My wife and family moved to Winona in 1973. I joined the Jaycees and started shooting Monday night league at the Winona Sportsmen’s Club with four other Jaycees. We had a blast but to me it was just a fun game. I didn’t join the ATA until 1982 and just shot local registered shoots because I was still building my business and didn’t have the time or the money to spend $12-$14 per hundred to shoot targets.

1989 was my first State Shoot at St. Cloud. Those were the days of barking dogs, electrical outages, and drinking cold Dr. McGillicuddy Schnapps in the parking lot with the boys from Rochester at the end of the day. Twist off the cap, throw it away and pass it around. It never made it around the circle twice. I had a great State Shoot and placed runner-up in the championship handicap behind Terry Clark. I broke a 97×100 and beat Larry Freeman in the shoot-off. I won about $2900 in cash and merchandise and I was hooked. I’ve only missed one State Shoot since then.

I’ve had the good fortune to be able to travel and win trophies at State Shoots in Wisconsin, Illinois, Iowa, Missouri, Southwest Grand, Heartland Grand, and the Spring Grand. I even shot well enough to be named to the ATA All American Veteran 2nd Team in 2017 and 2019, but I’m extremely happy with winning the 2012 Minnesota Handicap Championship and the ring that goes with it.

The good days of shooting come and go. The trophies get tarnished and the money gets spent. All that’s left are the memories and great friends, and that is the best part. Thank you for all the memories and friendships!