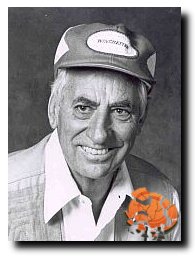 Roy Long, Aberdeen, South Dakota was one of the top trapshots in the Northwest, for more than 30 years.  He was born October 30, 1918 in Kansas City and after spending four years and eight months in the Army moved to St. Paul in 1945.

In  1952 Ted Smith, then Western-Winchester District Manager, hired Roy as a salesman and shooter for the company.  Roy’s first score at the traps was 18 out of 25 in a practice round at the Captain Billy Fawcett shoot.  He used Ted’s Model 21.

He shot his first registered targets in 1953, winding up with a .9112 average on 1,250 clays.  The following year he broke his first 100 straight at Williston during the North Dakota state shoot., finishing with 197 which was high gun for both pros and amateurs.  He won the N.D. state professional singles 21 times.  Roy wound up the ’54 season with a mark of .9478 on 1800 targets.

In 1961 he dropped his 200th target at Regina during  the Saskatchewan provincial shoot, finishing with 199 which was high gun among both pros and amateurs and three years later at Graceville, he missed the first target out, then hit 199.

Roy transferred to Aberdeen in 1969 where he continued his great shooting.  He finished his first season in South Dakota with .9835 average on 1,700 targets, high among pros and amateurs.  His last win was at the Iowa State Shoot where he broke 197.  He retired in 1980, the nine time All-American.

Hobbies are fishing and hunting, he has a trailer house on Lake Oahe in the Swan Creek Recreation area where he and his family fish during the summer. He has one daughter Diana Horvath and five boys, Jerry, Danny,  Randy, Donald, and Gregg.  His grandson Mark Horvath was captain of the undefeated Hill Murray Hockey Club that won the Minnesota State  Championship in 1983.

This year Mark’s brother Nick was goal tender for Hill Murray in St. Paul that finished second in the state tournament.