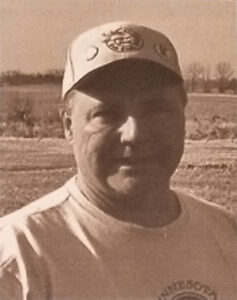 In 1969, at the age of thirteen, Ron was introduced to trapshooting by his father, Harold. He immediately fell in love with the sport. The following year, Ron was a member of a group that reopened the St. James Gun Club after it had been closed for a number of years. Ron has played an active part in the club every since and has been it’s manager for the past 15 years.

In 1973, Ron, finally worked up enough courage to try an ATA registered shoot at the Valley Gun Club in Mankato. After five years and only 5,800 targets, Ron made it to the 27 yard line. A few years later he earned his AA 27 AA pin and is currently two/thirds of the way to his Grand Slam He still needs the elusive perfect score from the back fence to complete this feat. Ron has never missed MN State Shoot in his 36 years as an ATA member and has shot nearly 150,000 targets thru 2007. He has been on eleven All State Teams and was a member of four State Team Championships.

Although shooting award arc great, Ron’s proudest accomplishment is introducing his two daughters and son to trapshooting. All three have excelled in the port and have been on numerous All State Teams.

Promoting Youth Trap hooting has always been a priority for Ron. He started a half price youth shooting program at the St. James Gun Club in 1996. As an MTA director, he promoted half price youth hooting for the MN State Shoot as well as other area gun clubs. Ron al o compile the target achievement awards for the MTA and presents the plaque at the MN State Shoot. Ron has served as a MT A Southern Zone Director for 12 years, was our MTA President in 2000 and is currently serving a ATA Alternate Delegate.