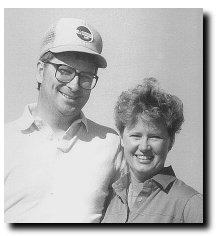 Bob shot his first registered targets at St. Cloud in 1970 breaking a pair of 98’s at singles and 95 and 99 at handicap. The first two handicaps he shot received punches and his 99 was a winner.  In 1971, Lou Ann joined Bob and shot her first registered targets.  In case you were wondering why Lou Ann got a late start, it was because she was busy having two children, Eric and Amy.

Trapshooting has not been the same with Bob and Annie traveling and winning major championships all over the country.

Annie went to the 27 yard line and broke her first 100 straight at singles the same day at the Minneapolis Gun Club in 1977.  She was the 11th lady in the ATA to be handicapped at 27 yards.  Bob has been on several All-American teams and has 9 years of 99% or higher singles averages.

Bob and Lou Ann have won so many trophies and championships that anything approaching a complete history would require a special supplement to the State Shoot Program.  However, there are a few that deserver special mention.  Bob won the Clay Target Championship at the 1982 Grand with 200 straight and 300 in shoot off.  At the 1983 Grand he won the High All Around with 397 X 400 and at the 1988 Golden West Grand he tied Ray Stafford for the High Over All.  Lou Ann won the Ladies HOA and the Dayton Homecoming with 200 straight at the 1984 Grand and was the Lady runner-up in the Grand
American Handicap and 6th place overall with a 98 in 1977.  She has also won the Women’s Doubles Championship in 1979.  They have won so many Husband and Wife Championships there is not a known accurate count.

This couple from Howard Lake has redefined the meaning of Champions.  Their performance over the years has been an inspiration and set a standard of excellence that is befitting their induction into the
Minnesota Trapshooting Hall of Fame.