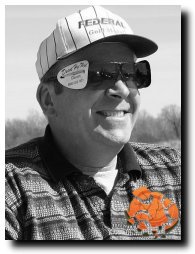 In the fall of 1982, Rick met Missouri chairshooter, Cliff Cockayne, who was on the 27-yard line. Rick set a goal to reach the maximum yardage, and he achieved that Aug. 7, 1983 at Central Minnesota G.C. That year Rick also won his first trophy in state shoot competition – high gun in a preliminary handicap with 98 from 24.5. At the 1995 tournament, he finished second in the Singles Championship following a 200, and the next year he was handicap runner-up with 96. During the ’98 state tournament, Rick placed second in AA in the title l6’s following 200 and won the long-yardage trophy in the main handicap with 97. In 1999 he earned Class AA honors in the state Doubles Championship with 96. The next year, he collected two trophies, AA winner in the main singles with 200 plus 74 extras and fourth place in the title handicap with 98. In ATA Central Zone competition, Rick captured the 1998 handicap crown with the lone 99, and two years later he placed fourth with 98.

Rick’s accomplishments during Spring Grand tournaments have been among his most memorable. In 1992, behind Leo Harrison III who posted a perfect 100, he was runner-up in a field of 999 in the Handicap’ Championship with 99 and 23 in the shootoff. Rick said this trophy is the one that has meant the most to him because it was his first in a “big important event.” That year he also carded his first 200 straight while tying for the singles title. In ’96, he was the Class AA winner in a prelim singles race, and three years later, February 18, 1999, his 100 for 27-yard runner-up in Thursday’s contest made him the first chairshooter to complete an ATA Grand Slam (200×200 in singles, 100 in doubles, and 100 from the back fence). He’s broken four 200’s at the Minnesota State Shoot, including one year when only he and Bob Munson did it. Rick has been on every Men’s State team but one since 1989, almost always as a “First Team” member

He supports non-ATA shooting as well; already this season he has posted back-to-back perfect scores in the Metro Jackpot. One such score per 500 entries is about the usual pace for that event.

Over the years, Rick has also competed at the North and South Dakota, Nebraska and Iowa State shoots. His trophies include top non-resident honors in the preliminary handicap with a field-high 98 at Nebraska in 2001.

Rick started shooting with a Remington 3200 with a 35” Simmons unsingle barrel, and he has owned seven to nine guns since then. He used a Remington 1100 with its original Seitz barrel at the 1992 Spring Grand, a gun he has kept for sentimental reasons. Rick shot his 100 in handicap with a Perazzi TMX, and he currently uses an MX-lO, which he bought from Ray Stafford at that tournament.

For singles, Rick uses Federal #8 lite reloads and for handicap 3-dram, #7 1/2 Federal papers. He wears Decot glasses with dark lenses and custom molded radio earplugs so he can listen to music. Rick still has additional goals. He wants to win a state title and a trophy at the Grand American.

Raised on a farm in western Minnesota, Rick has never strayed too far from his country roots. Choosing a career in agri-business, Rick has been the manager of the Farmers Co-Op Grain Co. in Louisburg, MN. since 1974. Seasonal long hours and evening work seriously cut into his shooting opportunities.