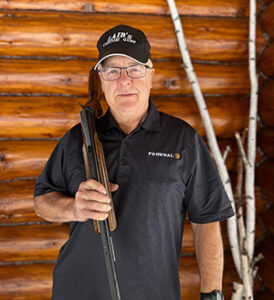 I am extremely honored to join the list of great people in the Minnesota Trapshooting Hall of Fame.  I’ve seen the pictures on the wall of inductees and only hoped I could be good enough to have my picture up with them.  But then later I was told my pic would have to hang in the men’s room, because there wasn’t room for me.

Growing up in the northwoods of the Chippewa National Forest, hunting, fishing and shooting were always the most important areas of interest in my life.  I grew up in a family of hunters and good fishermen.  My parents operated a bait business year round and so the duck and deer hunting fit right in.  Growing up in the 50’s and 60’s, our family never knew what beef tasted like.  I have two sisters, Gail and Gloria and a brother, Scott.  The girls had dolls and Scott & I had guns.  Life was good.

I was very fortunate to be introduced to trapshooting at an early age by my dad (Phil Cook) and my uncle (Bill Cook).  The Grand Rapids Gun Club became my “home away from home”.  At a young age of 12 my brother and I were allowed to shoot five shots at the club when we went there.  At 14 we loaded all the shells that were needed for shooting and the loader was in our bedroom, along with the powder and primers.  In today’s world we would be considered terrorists.

In 1965 I shot at the Minnesota State Shoot and won the title of Sub-Jr. Champion.  That silver belt buckle I earned became my most treasured possession.   The next year (1966) my brother Scott and I were the first brothers to win the titles of Sub-Jr. and Junior Champions at the Minnesota State Shoot.  I won the Junior title again in 1967 and 1968.  Winning championships at the state shoot gave me a lot of confidence in my early life.  I know what it does for young people to succeed in life and gain confidence in themselves no matter what the sport may be for them.

Life forced me to step away from trapshooting from 1969-1982.  Those years were spent working hard, getting married, having children and buying a trucking company.  My wife Diane and I have 3 children and we are very proud of their accomplishments in life.  They all hunt and fish, imagine that!  We will celebrate our 50th anniversary in September 2022.  The trucking company has taken a lot of our time in life, but it was worth it.

I started shooting registered targets again in 1987 and became an ATA Life Member in 1989.  I was able to team up with a good friend and shooting mentor from Cass Lake, Dennis Swearingen.  Dennis and I attended many shoots together.  Since shooting registered, I’ve made state teams for 10 years and All-American team for 5 years.

Frank Redfield and I first attended The Grand in 2014 for the first time.  We’ve been to every Grand since.  In 2016 I won the 16 yard Winchester AA Sub-Vet Singles Championship and the Sub-Vet National 16 yard Championship.

One highlight that stands out to me was in 2019 at The Grand.   Fifty-two shooters all had 200 straight and got in a very long shoot-off.  After 543 rounds it was down to just me and one other guy.  He ended up winning the national title, but I was very happy that night to go the distance and be the last one out.  I did get the Veteran National Championship that night, and again in 2021.

Going to the different shoots all around the country has been so enjoyable.  The camaraderie and friendships made over the years are priceless.  Trap shooters have become my “band of brothers” and I look forward to shooting as long as I am able.  I enjoy very much seeing my friends at the clubs every year.  Now with the youth shooting there are new friends to talk to.  It doesn’t get any better than that.

Thank you for this honor.  I will do my utmost to live up to it, and keep our sport alive.