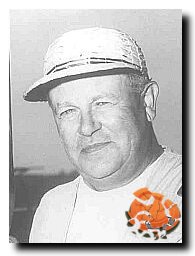 Satchell Paige in baseball, Sam Snead in golf, and Gordie Howe in hockey are ageless wonders of the professional sports, but none can compare with our own Oz Conrad, who will be inducted in the Minnesota State Trapshooting Hall of Fame at the State Shoot, St. Cloud, July 9-13.

Oz was born in 1897 in Stillwater where his grandfather built the first saw mill in 1844. He shot his first skeet targets at the Stillwater GC which he helped organize in 1930. Conrad shot practice and league targets for many years before he competed in his first registered trapshoot in 1947.

Since then he has fired at 690,000 trap and skeet targets with 52 different guns, of which 290,000 were registered trap clays. He has hand loaded 570,000 shells. Oz has won countless championships at both sports, too numerous to mention.  He competed in 15 Grand Americans where he won countless championships. Conrad shot his last Grand in 1968, took sick with emphysema, drove home alone after being advised to go to a Dayton hospital.

That year he won three Veteran championships, the Preliminary with 100 straight, the Introductory with another 100 and the Class A with 197, the day he became sick. Conrad shot his last registered targets here  at the Minneapolis GC last fall where he won the handicap with 98 of 100, five targets over the field.

OZ made his winter home in Florida where he shoots six days a week at the Palm Beach GC.

He broke 100 straight at the Miami GC on his 82nd birthday.

Conrad has been selected on both the All American and Skeet Teams and was six times a member of the Minnesota All State Trapshooting Team, which included 1980. Oz was a pilot in the first World War. His charming wife, Faith, won several State Ladies Championships before she hung up her guns.