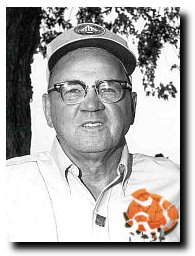 O.B. Stovern attended his first registered trapshoot during the 1930’s in South Dakota, accompanying his father and uncle.

In July, 1932 he won the Sioux Indian Singles at Watertown, S.D. with a 199 X 200.  His trophy was a Sioux Indian blanket.  O.B. was recognized by Remington Arms for his fine shooting in this event.  During the depression years, money was not available for shooting, but by 1956, O.B. had registered 25,000 singles targets.

He reached the 50,000 target mark in 1986.  For many years, starting in 1963, O.B. has been active in the Willmar Rifle and Pistol Club.  In 1981 he was awarded a club life membership.  He continued activity teaching new as well as experienced shooters, has helped keep trapshooting alive in the Willmar area.

O.B. has been a frequent member of the Minnesota State teams.  Starting in 1969, he has been the Minnesota Veteran’s team ten times and the Team captain three different years, 1971, ’72 and ’76.  He has earned a place on the Senior Veteran’s team both in 1988 and ’89.  O.B. has attended the Grand American six times and has won several major trophies.

In 1971, he was veteran All-Around Champion, the Vandalia Handicap Veteran Champions, and the Veteran Doubles Champion.  In 1973, he was on the ATA’s Veteran’s All-American Team.