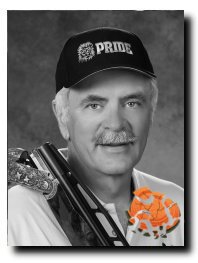 Mark is being inducted into our Hall of Fame in both the shooting and contributor categories. Mark’s ATA record began in 1988 when he registered 200 targets at the Minneapolis gun club. From that first experience, the hook was set. To date, Mark has registered over 100,000 singles, 91,000 handicap, and 75,000 doubles. Mark reached the 27 yard line in 1996 at Eau Clair, Wisconsin; he became a AA singles shooter in 2000, earned his AA27AA pin in 2002, and became AAA shooter in 2005. Mark was our state handicap champion in 2005. In 2007, he earned his Grand Slam when he broke 100 doubles at the Nebraska State shoot. In 2008, Mark earned a spot on the men’s All American team.

Mark was first elected to the MTA Board in 2005 as Vice-President. He was elected President in 2006 and has served in that capacity for the last five years, the longest consecutive term in our history. During Mark’s years on the board, our association has seen significant changes. We have a mission statement, goals and objectives, and
have aggressively pursued additional forms of funding. As a result, our bank account has grown ten fold, our youth shooting program has experienced an annual ten percent a year growth, and we have sponsored the first and second annual high school state championships. We are in the process of establishing a tax exempt non-profit organization for our youth program that will greatly enhance our fund raising. A new membership dues program was initiated to help increase our new member rate. We have seen our
relationship with the Alexandria Shooting Park stabilized and we have rewritten our by-laws. Mark initiated the concept and then teamed with Representative Dave Dill to begin the work of developing a new, metro area, all purpose shooting facility. We have twice yearly member newsletters to improve our membership communication. Mark also wrote regular TRAP and FIELD articles forseveral years to further the communication within our association.

Besides trapshooting, Mark enjoys hunting and has harvested nineteen of the North American twenty-eight big game animals, including all four of the mountain sheep, hunting’s “Grand Slam.” Mark’s favorite memory in trap shooting was the year his daughter Kelsey won a shootoff against Nora Martin at the Grand American, under the lights, and earned her twenty-seven yard pin in the process. Second would be his perfect hundred from twenty-seven yards during the Florida State shoot.