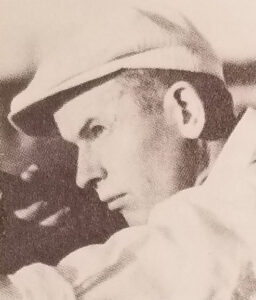 Lowell King, Detroit Lakes, started shooting at Spencer, Iowa, in 1929. That year he took in several turkey ham and bacon shoots. Two years later King met Hall of Famer Johnny Jahn at a shoot and Johnny advised him to try shooting registered targets. That year he shot 2260 registered clays and wound up the season with a .9261 ATA average. In 1939 he moved to Minnesota where he became a salesman for Kelly-Howe Thompson at Fergus Falls. He finished the season with a .9781 average. The following year he won the Minnesota State 16-yard championship with 198 x 200 at Blooming Prairie. More than 10,000 spectators watched the shoot largest ever in Minnesota. More than 4,000 cars were counted. King has won countless championships, among them the State All-Around in 1952 and 1954 and the Diamond Badge in 1966 with 50 straight after a shoot-off.

He tied for the State Doubles twice. His last big win came at the Fargo Gun Club when he shattered 199. He attended 12 Grand Americans and became a life member of the ATA in the early 40s. He was also a top live pigeon shoot winning many championships at Carl Thacker’s Jefferson Gun Club in South Dakota, at Matt Youngman’s pigeon ring at Sleepy Eye and at western shoots. Next to trapshooting he enjoys hunting timber wolves and coyotes from airplanes. He has logged over 2,200 miles of shooting time in Canada, Minnesota and the Dakotas. King is now retired and is a member of the Detroit Lakes Gun Club.