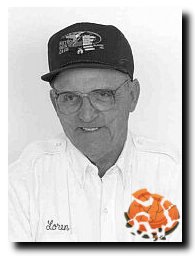 This year we are proud to honor Loren Hentges, as both a shooting and supporting member to the Minnesota Trapshooting Hall of Fame.  Loren has been shooting ATA targets since he became a member in 1976.  Loren’s love of trapshooting has been demonstrated repeatedly over the years.  His accomplishments, promotion of all shooting sports, and his continued efforts to keep trapshooting alive, will benefit us all and future generations of trapshooters.

Loren has shot over 80,000 singles targets, 75,000 handicap and 20,000 doubles.  He has been on the State Veteran team 5 years and Captain of the Senior Veteran’s team 1 year.  Through the years he has won more than 10 different state class trophies.  In addition, in 1993 he won Non-Resident Veteran in singles, doubles and High-Over-All at the Canadian Grand.

He won Sr. Veteran runner-up, HOA at the Grand in 1996, he probably would have won Champion if he had shown up for the shoot off. Loren has also actively promoted the sport of trapshooting over the years.  He served on the Board of Directors of the MTA.

The Suburban Trapshooting League, “Traveling League”, was formed by Loren.  His idea was to promote shooting, to bring local clubs together, to raise money for the benefit of all the clubs, and to publicize trapshooting as a competitive sport by coverage in local papers.

All this and still have fun shooting and enjoying the different clubs and the camaraderie of the shooters.  Because he loves the sport, in 1985 he purchased the Metro Gun Club in Blaine.  Since then he has thrown more than 25 million league and registered targets.