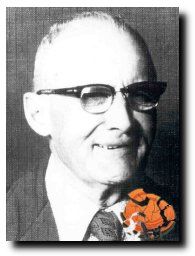 Leonard Wieland, LeSueur, is Minnesota’s oldest active registered trapshooter, born November 7, 1885, in St. Henry, Minnesota.  He got his first taste of shooting back in 1909 when he shot live pigeons with his father Tony, on their farm near town.  Leonard competed in his first registered trapshoot at Ft. Snelling Gun Club in 1917, the year before he enlisted in the 113th Ammunition Train in World War I.

Wieland, who has won over 75 championships, captured the Minnesota State Fair Singles championship in 1921 with 48 X 50.  His most cherished victory was at Captain Billy Fawcett’s summer resort at Breezy Point in 1928.  There he broke 100 straight to win the 16-yard championship, defeating Captain Billy Fawcett, who three years before was manager of the victorious American Olympic trapshooting team in France; also Jack Cunningham, who won two state 16-yard championships later; and Jack Frink, the Grand American winner and State Champion in 1923.

Averages were not nearly as high in those days.  F. G. Jackson, Winona, won the state high average that year with .9404.  He became a life member in the ATA in 1928. Two years later he won the MinnesotaState Doubles Championship with 47 X 50 and Roger Fawcett took the state doubles high average with .8395.

Wieland, who has shot over 200,000 clay targets (registered and practice) spent 40 years in the automobile business in LeSueur.  He is a charter member of the Green Giant Gun Club in LeSueur,  Sioux Indians, the Minneapolis Gun Club and Arizona Gun Club at Mesa where he spends his winters.