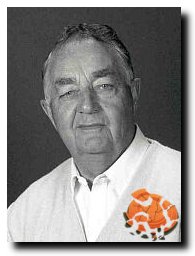 After shooting league targets for several years, Ken became interested and active in registered shooting when he worked at the 1956 State Shoot in St. Cloud.  He was a Charter Member of the Central Minnesota Gun Club and served as a Director or Officer from 1958 through 1985.  He was Vice-President of the club in 1967, President in1968, and Treasurer from 1969 through 1975.  These were the years when the Central Minnesota Gun Club was active in assisting in development of the Del-Tone Trap Range.

Ken became a Director of the Minnesota Trapshooting Association in 1965.  He was elected Vice-President in 1968, President in 1969, then again elected Director.  In 1975, he was appointed MTA Secretary and Treasurer and as been elected to that office every year since. Ken arranged for and took care of the entry, squadding and cashiering at the State shoots from 1965.  He has also been involved in the writing, printing and mailing of the State shoot program for 25 years (1965 to present).

Ken helped a good many clubs get started with their club shooting, and when they asked for help with a registered shoot, he assisted them any way he could, including working with them at their shoot.  His involvement with trapshooting has won him several community service awards.  In 1984, he was honored with an award by the
Minneapolis Gun Club for his dedicated service to the Minnesota Trapshooting Association.

Even though Ken’s shooting years were medically curtailed early, he had registered 35,700 targets and earned several worthy trophies, including MTA Class Championships in 1965 and ’66, and has been on the Minnesota State and Zone Teams several times.