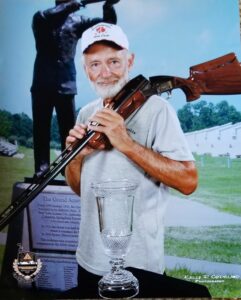 WOW, to be nominated and voted into the Minnesota Trapshooting Association Hall of Fame was totally unexpected and quite an honor!!!

Little did I know when I took up trapshooting to improve my pheasant hunting shooting skills that it would lead down this road!

I started shooting on a trap league at the Wilderness Hunting Preserve, now the Horse & Hunt, in Prior Lake, and decided to check out the “other” gun club that I was frequently driving by, The Minneapolis Gun Club. I welcomed the generous help of Mike & Dorothy Schmidt, who recommended a team they felt would be a great fit for me. That was back in the early ’80s and I found out how much I enjoyed the sport and wanted to do more of it!

In 1986 there was a registered shoot at MGC, the Captain Billy Fawcett Shoot. Tom Sletta signed me up for the ATA so I could shoot. Now, 137,000 + registered targets later, I’m still going after them!  I’ve also acquired a taste for Black Angus, so the pheasants are safe!

As I spent more time at MGC, I became more interested in the history of MGC and trapshooting in general. Once I found out MGC was incorporated in 1875 and started out on the shores of Lake Calhoun, I was hooked. At one time, I had amassed one of the premier collections of early trapshooting memorabilia in the country. A few years back, I sold off most of it. It became time for someone else to be the caretaker, but I did keep items that are MN-related and will always be special to me.

Over time, I became more involved with MGC and was elected to the MGC Board of Directors in 2002.  I have continued to actively serve the best interests of MGC for the past 16 years as President of the Club. As President, I was fortunate to have been involved with the ongoing changes to our sport. Voice calls, Pat Traps, 2 – hole targets, clay targets instead of glass balls, were some of the advancements we now have in place.

These advancements were not in place when a lot of us started to shoot trap.

One of the most rewarding changes we have seen has been the High Schools joining our sport. I was fortunate to be involved from the start-up and see some of Minnesota’s finest shooters evolve and step to the line. It has been so rewarding to know I had a part in the future of my most favorite sport.

While serving as a Director at MGC, the Board wanted to “revive” the registered trap shoots so I thought there wasn’t a better time to get involved with the Minnesota Trapshooting Association. I was a Central Zone Director starting in 2003 for 7 years and an ATA Alternate Delegate for 2 years. Since 2010 I have been the MTA Website Liaison; coordinating with the Webmaster, and the MTA Board of Directors in posting updates and pertinent information. The website has recently gone through a complete overhaul.  I have been fortunate to serve with 8 MTA Presidents and many Zone Directors.

I have had many favorite guns to shoot with over the years. I shot my 1st 100 straight with a Winchester Super X, and made it to the 27 yds. line in 2001 with a Beretta 390. I was always looking for “The One” trap gun. After much research, I chose to go with a Bowen Single Barrel Trap gun. Being a true trapshooter, one Bowen wasn’t nearly enough, so now I have 3 of them, hence the AKA Jimmy Bowen.

And now, starting 2021 being inducted into the MTA Hall of Fame, ranks right there at the top.

I want to thank my very supportive wife, Mary Jo, my son Matthew, the MTA, and all the friends that I’ve made over the years for all the great memories.

Don't waste another moment!  Now is the time to be a part of this amazing organization.
We make it simple to participate and get involved. Download our FREE MTA Wallet Card for more information.
LEARN MORE ABOUT US NOW