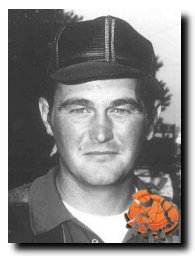 Henry Hein, 37 year old La Crescent apple grower, hunter and trapper was born Jan. 5, 1942.  Henry’s first interest in trapshooting was in 1961 when he took part in a few turkey shoots around home.

Two years later he competed in several league shoots at the LaCrosse gun club where he won his first trophy with a 97.  In 1965 he received his greatest thrill when he won the Minnesota State Trapshooting Championship at St. Cloud with the lone 200.

He won the state singles again  in 1968 and he tied for the title in 1969 with a 200, in the following year with another perfect 200.  Henry has won the state doubles twice, the Diamond badge, the All-Around and several state class AA championships.

Hein captured the ATA Zone singles at Chicago in 1970,  the Iowa state open HOA in 1974 and numerous championships. Hein has won several major Winter Chain shoots at Las Vegas and Tucson which included the Mint Doubles at Vegas with a 99 in a 45 MPH gale. “The wind was fierce, the light was failing when Henry shot in the last squad, but it didn’t bother him,” said Betty Ann Foxworthy, editor of Trap and Field. “This was the greatest piece of shooting I ever saw,” said All-American Gene Sears who broke 93.

He won the class AA doubles at Las Vegas five years later after breaking 99 X 100 in a shootoff and the Sahara Handicap in 1975.  Hein is rated as one of the top doubles gunners in the nation.  He won the Grand American Class AA doubles in 1966 with 100 straight, the class AA in 1972 with 99 and was runner-up in the doubleschampionship in 1975 with 99.

Henry broke 200 straight, then 99 X 100 in the shootoff over 13 others to become runner-up in the 1969 North American Clay Target race.  Hein won the diamond pin awarded by Trap and Field in 1974 to
celebrate the magazines 75th birthday when he shot the first 75 straight in the GAH.  He won the special doubles race the following year at the Grand with 100 straight.

But I think his greatest disappointment in 1965 must have been when he was one of four running 75 straight in the GAH.  Another perfect 25 and he would have been the first  ever to win the coveted title with 100 from 25 yards.

Hein has been selected on more All-American teams than any Minnesota shooter.  He was a member of the Sports Afield  first teams in 1970, ’71 and 1972, was chosen on the second team six times and given honorable mention in 1973.  He was captain of the Minnesota All-State team seven times and co-captain five different years.  Henry averaged 98% or better nine times.  Highest was .9869 in 1976.  He has averaged 93% or better on doubles 10 times, highest in 1972 when he finished with .9521.

His hobbies are duck hunting and catching walleyes in the Mississippi River. He was a American Legion baseball pitcher, and a good one, in 1959.