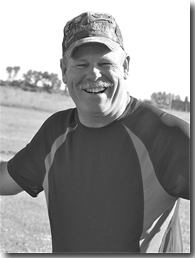 Glen Lonneman is a ‘trapshooter’s trapshooter!’ His low-key nature belies his intensity as a fierce competitor, successful businessman & cabinet maker, and avid volunteer. In all areas of his life, Glen is the kind of person who targets any goal and just, “gets the work done because somebody has to”!

An avid hunter and trapshooter, Glen began shooting as a youngster on his family farm near Wilmont, Minnesota. Like many shooters, Glen’s first experiences with shooting began with his brother Gary teaching him how to use a BB gun, followed by his dad introducing him a .22. While Glen shot some league trap as a young man, shooting was put aside to focus on building a career in cabinet making, which he says, like trapshooting, he also learned by trial and error!

By 1999 Glen started shooting league at the Worthington Gun Club and, by 2001, was running the club as President. While he joined the ATA in the fall of 2000, Glen’s first ATA targets were not shot until he visited Florida’s Silver Dollar in December. In a short thirteen years he has attained more than 64,000 Singles, 58,000 Handicap and 44,000 Doubles ATA registered targets. In fact, Glen managed his first 25,000 Singles in under five years and made the 27 yard line between his first and second year of ATA shooting.

When asked what the highlights of his shooting career have been, Glen stated winning the Minnesota State Singles Championship in 2006 was a really big deal for him. He was in a shoot-off with one competitor who happened to start on his favorite post–post 4. Glen recalls that they both hit every target and immediately after hitting his 25th bird, put his gun down to prepare to go get more shells when he heard, “LOSS!”. The other shooter missed the 25th bird to make Glen the Champion, a fact that he never forgets to bring up whenever they meet. Glen also earned the 2011 Minnesota State Shoot High All Around honors with a 391×400.

Glen has served the Minnesota Trapshooting Association for many years, first as a Southern Zone Director and the last three years as MTA President. Regardless of the office he holds, Glen has always dug in to complete any task at hand and has generously donated time, his carpentry skills, and funds when needed. The beautiful custom-made cabinets the MTA now uses for classification & squadding were created and donated by Glen. The AIM perpetual trophies in the trophy case, as well as pheasants hunts for the youth auction, are just two more examples of his commitment to the sport.