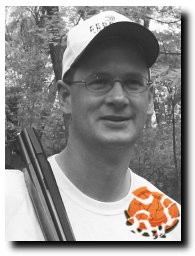 Eric began shooting registered trap in 1981 at the 1st youth program at the Minnesota State Shoot.  Eric’s scores that day were; singles 80, handicap 83, and doubles 65.  In 1982, Eric won his first handicap yardage at the Iowa State Shoot.

On July 2nd, 1988 while shooting in Brandon, Manitoba, Canada, at the Canadian Nationals, Eric ran his first 200 straight in singles.  Eric shot his first 100 straight in doubles on July 21, 1990 at the North Dakota State Shoot.  Eric’s shooting accomplishments are as follows: