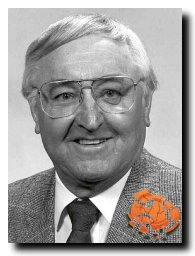 Ed Mlynar has been an active and dedicated member of the Lester Prairie Gun since 1968 when at that time the club added it’s second trap field.

In 1975, he spearheaded the major enlargement of the club house along with the addition of two trap fields, with a practice trap following a short time later. Combined with the functional and comfortable club house and fine trap fields that Ed has had so much to do with, this facility continues to make Lester Prairie a popular club for registered shoots.

Ed was always involved with the advance planning, then early the day of the shoot readying the trap fields, plus making sure that competent help was also available for both the clubhouse scoring and entry.  When the shooting was done for the day, he compiled the shooters’ scores and prepared and sent in the ATA report as well as a Trap and Field story.

For 22 years and 145 registered shoots, Ed made sure his club provided a good shoot. He was there working at each and everyone of those 145 shoots.

Ed Organized and maintained a full program of league and practice shooting which throughout the years has used over six million targets.  This activity has surely helped trapshooting enjoy a high sport profile.

Ed and his wife, Florence, have been involved in a good many community and civic improvement projects in addition to all he has done for trapshooting in the area.

It is certainly noteworthy that Ed Mlynar with his 28 years of leadership, guidance and dedication has contributed a great deal toward making trapshooting a pleasant and viable sport in Minnesota.