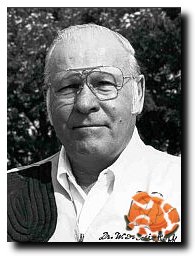 Dr. W. G. Miskoff, known as Doc, has been shooting registered targets since 1960. Doc is a life member of the ATA, three gun clubs in the Hutchinson area and the Owatonna Gun Club. He can be found  almost any weekend at a Minnesota registered shoot.

Doc was named to the MTA board of directors in 1966 and he served consecutive years until 1977 when he was appointed as alternate Minnesota ATA delegate. He was
re-elected to that position every year through 1987.

As a MTA director he was involved in formulating and helping to write the Minnesota Zone Trapshooting program. While an alternate ATA delegate he was instrumental in changing the division structure of the ATA Central Zone into four smaller zones.

He has been on the MTA State team several times, as well as the Central Zone team and other respected honor shooting teams.