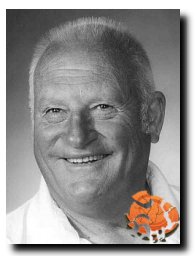 Dick is a familiar face at ATA shoots during the summer anywhere in the state. He started shooting registered targets in 1964 and is a life member of the ATA. Not counting league, practice and merchandise shoots, Dick has a total of more than 118,000 registered targets; 58,500 singles, 57,800 handicap and 1,100 doubles. His titles have included Class B Championship 4 times and  he has tied for the MTA 16 yard Championship 4 times, unfortunately he lost 4 times.

Dick has served on the MTA Board for 8 years.He has served as Northern Zone Director, Vice President 1990 and 1992 and President in 1991.

Anyone who has shot at the Grand Rapids Gun Club has seen Dick in action.  He was instrumental in getting the new club built in 1980 with 9 traps, a beautiful clubhouse and hook ups for 40 units.

Dick has been Secretary-Treasure and President of the Grand Rapids Gun Club for 27 years.