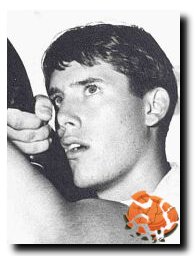 Craig Hall of West Concord was one of the top trapshots in the Gopher state for many years and the thirty-third shooter to be inducted in the Hall of Fame.  He broke 100 straight doubles at Denver in 1968 to become the youngest shooter ever to break a perfect score on the twin clays and the second in the state to accomplish this feat.  The 34 year old Rochester pharmacist who started shooting in 1960 at age 12, has been selected on five of Jimmy Robinson’s Sports Afield All-American Sub-Junior and Junior teams and eight Minnesota state teams.

Craig won countless championships which included the Twin City 500 target marathon in 1963 when he was 15 and the following year the Captain Billy Fawcett Class A Singles and HOA and the Minnesota state class AA singles with a 100 X 100.  IN 1965 he captured the Captain Billy Fawcett Junior Doubles and Ducks Unlimited  Singles
with 199(broke 199 to tie Stan Wosmek the year before).  He won two championships at the state shoot that year, the 10,000 lakes handicap after a shootoff with 93 and the HOA when he wound up with 658 X 700, four targets over Hall of Famer Bard Higgins and several other All-Americans.  In 1966, the year he was selected on the Sports Afield All-American Junior Team he broke the lone 98 to win the Grand American Class A Doubles after losing his 100th target which kept him out of the shootoff for the Championship.  No Minnesota gunner has ever won the Grand American Doubles.  At Las Vegas, he won the HOA handicap with 284 X 300 in a field of over 900 trapshooters.

Craig won the Minnesota state doubles in 1967 with 97, the class AA singles, the all-around with a record 391 X 400 and he placed second to All-American Henry Hein in the HOA.  He averaged .9880 on 800
singles at the Grand American and finished the season with a .9840 average on 2700 clays, high in the state.  Hall, co-captain of the Minnesota men’s all-state team set a Minnesota record the following year which ranked 16th in the nation and his Grand American squad, Loral I. and Chuck Delaney, Bob Putnam, Tom and Craig Hall came within one target of tying the world squad record with 499 X 500.

His last major victory was in 1969 when he won the state doubles for a second time.

Craig, a dyed-in-the-wool hunter and angler, has three children, two boys, Michael 15, Brian 13, and Christi 9, wife Doty, mother Bobby and his dad Tom, the culprit that missed the only target when they set
a state record of 499 at the Grand.