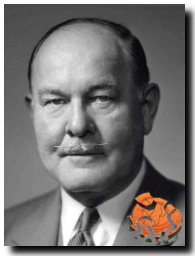 Charles Lily Horn, President of the Federal Cartridge Corp., Chairman of the Minnesota Emergency Conservation Committee, and community and education leader, has done more for conservation and the shooting game than any other one man.

I first met Mr. Horn in the early 20’s and he has been an inspiration and pillar of strength to me and all shooters for the past 50 years. During the 20’s and depression days when the shooting  game was at a low ebb, it was Mr. Horn through his promotional ideas and ready cash that kept the sport alive.

In 1947 we awarded Mr. Horn the Sports Afield Sportsmen’s of the year Award for his untiring work in all forms of shooting and conservation. He was the chief sponsor of the 4-H clubs, an ardent supporter of the Quetico Superior project and an outstanding advocate of clear streams and correcting pollution problems long before anybody else.

Mr. Horn graduated from the Minnesota University Law School in 1912.

No other Minnesotan has done as much for the nation’s higher education institutions as Mr. Horn as chairman of the Olin Foundation Board of Trustees.

In 1967 he was presented with the Outstanding Achievement Award by the University of Minnesota.
Jimmy Robinson