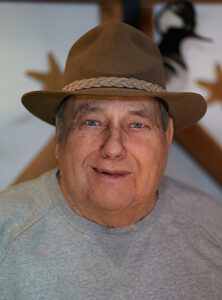 Born in 1936, Chuck was the only boy of four siblings. His father passed away when he was 8 years old. He spent many of his childhood years growing up on his grandparent’s farm in Hamel, Mn. His early education was through Holy Name, a two room school. After WWII he moved to Minneapolis with his mother and sisters. He later attended Vocational High School where he learned his lifelong skills as a jeweler and diamond setter. He married his wife, Judy, in 1958. They had one daughter, Kim.

He and two friends decided to try hand trap in the early 1960’s, leading to registered skeet shooting shortly after. By 1970 they found that trapshooting had a larger community and more competition in the sport. That first year Chuck shot his first registered targets in handicap with a 78% average. In 1971 he held a 90.75% average in 16 yd. He shot his first 100 doubles at Owatanna Gun Club. It seemed as if he found his niche.

Reflecting back on his 50+ years in the sport, he has won numerous prizes, awards, trophies, and the respect of the trapshooting community. He has traveled around the country, participating in a myriad of other state shoots, including Iowa, where he competed for 25 years.

Some of his most memorable accomplishments include:

Chuck will be 85 years of age at the time of his induction, and still active in the sport. To date he has 260,505 registered targets. With over 100,000 in 16yd. His goal in finishing out his trapshooting career is to achieve 60,000 targets in doubles, and 100,000 in handicap. Anyone who knows him is sure he will reach his objective.

When asked what was his biggest take away from all these years in trapshooting, he said he is most grateful for the lifelong friendships he has made.