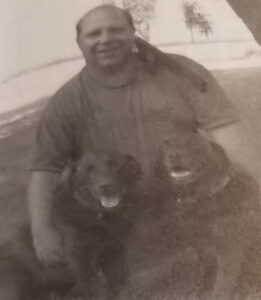 Even though Pat has been around trapshooting since the day he was born, it wasn’t until reaching the age of 8 years old when he first experienced the taste of trapshooting. Pat begged hisgrandfather, Kennie Mertins Sr, to let him give it a try. With some hesitation, Kennie agreed. After only one shot, they both realized maybe Pat should wait until he could handle the recoil of a 12-gauge shotgun. Somehow Pat did manage to hit the target, but more importantly, it was then Pat knew that this was the sport for him. Five years later,at age 13, Pat again tried trapshooting. The year was 1976 when Pat registered his first ATA targets. The shoot was at the Labor Day Shoot held in Blooming Prairie, Minnesota. Only three years later, Pat won the first pair of his many Minnesota trophies. (1979 Junior Singles Championship Champion and 1979 Junior Champion of Champions).

Pat attended Trinidad State Junior College in Trinidad, Colorado, where he earned a Gunsmith degree in 1983. After graduation, Pat moved to Marysville, Washington to begin his careeras a guns1nith. While in Washington, Pat registered ATA targets andhe also joined the Pacific International Trapshooting Association (PITA). Pat lived in Washingtonuntil1997,when he decided to 1nove back to Minnesota. Pat establishedhis shop in Wells, Minnesota, where he has operated ever since.

Pat has been on the Minnesota State Men’s Team twelve times and the Junior Team once. He was on the Washington State ATA High Average Team three times and the PITA High Average Teams nine times. Pat has earned four Grand American Trophies since 2002. He has also won nine major Minnesota State Trophies, including two Memorial Handicap Championships:, Two High All Around AAA Championships, High Over All Champion and Runner-up, and our Doubles Championship. Pat has also won many PITA awards and major awards at large national shoots.